In our increasingly complex and information-driven society, the importance of using science and technology is paramount. Scientific inquiry helps us learn about our environment in a systematic, controlled way and to appreciate how we can both affect and protect it. In the Arctic, scientific and technological developments are advancing exploration and providing new insights into how the region’s complex ecosystems operate.

However western science isn’t the only way we have of understanding these special places. Traditional knowledge, the insight and information gained over generations of cultural experience, also helps paint a picture of how things are and have been through a lens of time not possible with western science. Another way to think of Traditional Knowledge is the natural “crowd-sourcing” of experience and smarts that is developed over generations. 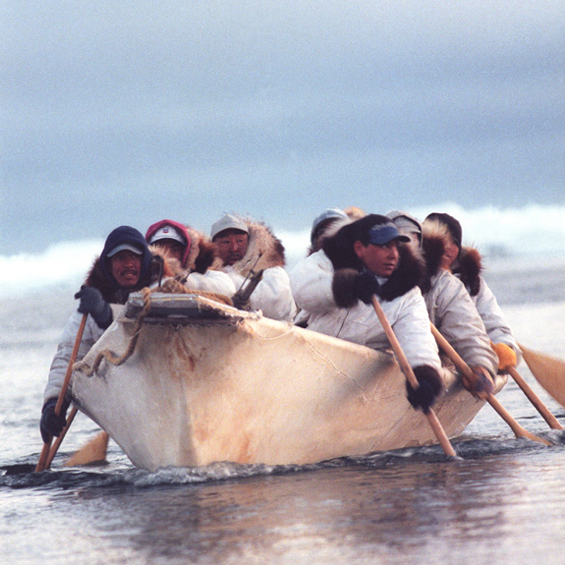 In the Arctic, traditional knowledge about the land, sea, ice, and living world is passed down from generation to generation of native peoples who have sustainably lived and hunted in the region for thousands of years. Their forefathers had a rich and complex understanding of their environment and the animals within it, on which their entire cultures depended. Such deep and intimate connections with the physical and living world are traditionally shared through spoken word, shared experience, and legend.

Increasingly this traditional knowledge is being documented and is helping to guide and complement scientific studies.

In some areas, traditional knowledge of ice movement patterns and the migration routes of key species is guiding conventional scientific studies to empirically document these dynamics. Scientists can evaluate their findings relative to thousands of years of accumulated first-hand experience from those who have evolved with these harsh and changing ecosystems. Well-documented scientific findings can also serve to evaluate and provide empirical support for traditional knowledge-based observations. Two recent cases illustrate these interactions.

Historically, whales and other marine mammals were assumed to have a relatively rudimentary sense of smell, given their enhanced hearing and the role of the ocean environment to mix chemical scents. However, native people who traditionally hunt bowhead whales have long known and reported that these animals have quite an acute sense of smell and that failure to account for this in hunting strategies can mean a failed hunt.

Working in collaboration with traditional hunters, anatomical investigation of bowhead whales has revealed brain structures known to function in the sense of smell in other mammals.

Similarly, while early studies of hearing in ringed seals suggested these animals had relatively poor hearing (Terhune and Ronald, 1975), traditional knowledge derived from generations of pursuing these and other ice seals indicated the opposite. Recent scientific studies of hearing in spotted seals and ringed seals using careful controls over extraneous noise have revealed that in fact some of these species hear as well or better than many others both above and below the water (Sills et al., 2014; 2015).

The University of California Santa Cruz, Long Marine Lab has been conducting experiments on seal hearing and cognition and has contributed large amounts of new knowledge to the field, using traditional knowledge to drive new scientific inquiry.

View more photos and video of their research with seals.

The oil and gas industry has recognized the inherent importance of directly engaging and involving Native communities to benefit from their wealth of experience in ongoing research and environmental monitoring of industrial activities. Native people participate in field operations such as collecting environmental samples and serving as marine mammal observers during exploration surveys.

Entirely new research and environmental monitoring programs are emerging through this recognition and support from industry, such as the baseline studies program supported by Shell through the North Slope Borough. A similar program is underway in the northwest region of Alaska and there are a number of other related efforts where industry is working directly with Native groups to understand and evaluate potential effects of development.

Through these partnerships, research scientists and organizations from academia, government, and the private sector are collaborating with Native peoples to better integrate traditional knowledge with scientific research. This integration recognizes the complementary nature of these knowledge bases and will help to improve the accuracy of scientific studies, open new lines of scientific inquiry, and in some cases provide empirical validation of the traditional observations passed down through generations of experience.

In summary, there is increasing appreciation of the fact that traditional knowledge can play a key role in informing, complimenting, and benefiting from modern science’s pursuit of accurate and useful data to understand and improve a changing Arctic.