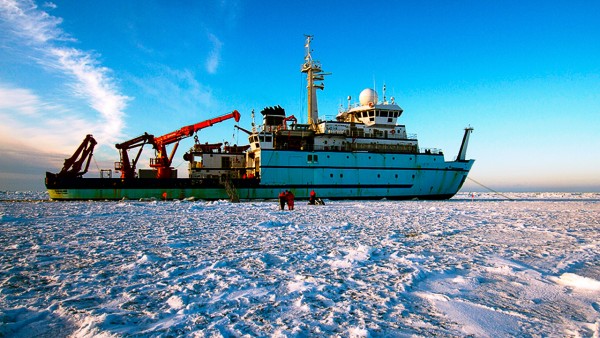 An upcoming addition to the U.S. Arctic vessel fleet will provide scientists with a new opportunity to conduct scientific research in the Arctic.

ScienceInsider reports that the RV Sikuliaq recently completed a 23-day journey to successfully test the $200 million vessel’s capacity to operate in icy Arctic waters.  The vessel is expected to begin research operations in icy seas in July when it ventures out to the edge of the sea ice.

The 80-meter-long Sikuliaq is not an icebreaker, but its hardened hull is rated to move through sea ice as thick as 0.8 m. And it “crunched” smoothly through ice it encountered during various trial procedures, reports chief scientist Carin Ashjian, a biological oceanographer from the Woods Hole Oceanographic Institution (WHOI) in Massachusetts…

Winches delivered sampling and sensory equipment smoothly in ice and water, and crews successfully exited the ship on foot to take samples from surrounding ice. Inside the nearly 3500-gross-ton vessel, large decks and spacious lab areas had scientists salivating. “She’s a great ship, and a great addition to the U.S. science fleet,” Ashjian says.

ScienceInsider notes that Sikuliaq will provide researchers with an opportunity to access icy waters in areas such as the Bering Sea during the fall and spring, a time of the year in which other vessels would typically avoid traversing the area.