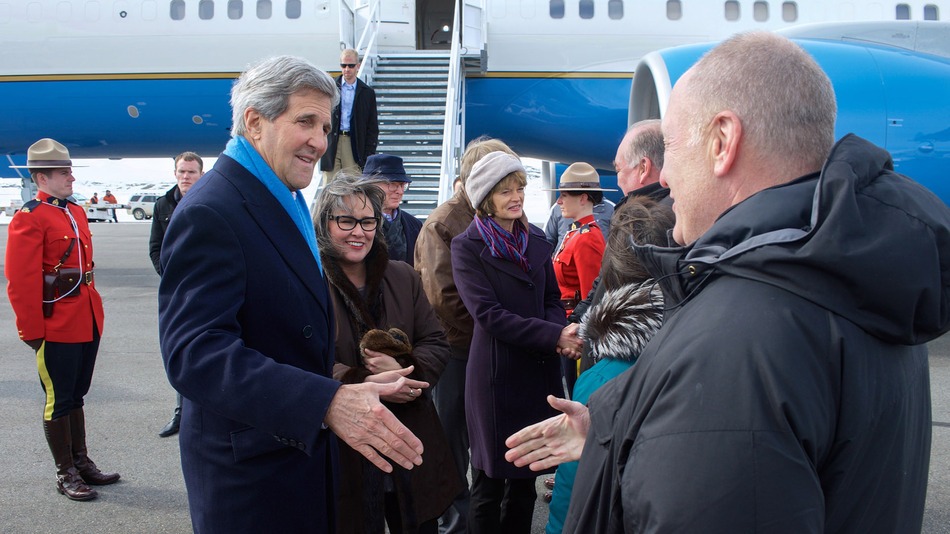 With a focus on climate change, the U.S. has assumed the chairmanship of the Arctic Council following Canada’s two-year stint at the helm of the organization.

Linking climate change with severe flooding in the Alaska village of Galena, Secretary of State John Kerry laid out an ambitious agenda to address greenhouse gas emissions and protect the Arctic Ocean as he accepted the reins of the eight-nation Arctic Council on Friday at a ceremony in Canada.

Kerry spent less time addressing Arctic development opportunities than the environment as he accepted the two-year chairmanship for the United States.

Alaska leaders, acknowledging climate change plays an important role on the council, are calling for the group to give increased attention to the economic possibilities presented by melting sea ice.

When Kerry did mention development, he said it must be done carefully to protect communities that could be hurt by ocean acidification and other rapid changes brought on by global warming.

However, the Huffington Post notes tensions between Russia and The U.S. in other areas around the globe will make the balancing act at the Arctic Council and Sec. Kerry’s goals for the Chairmanship that much more difficult to achieve.

Russian Tupolev Tu-95 Bear ‘H’ Bombers are increasingly testing airspace responses of adjacent Arctic states. “They’re flying in places… where they’ve never flown before,” as noted in February by Adm. Wiiliam Gortney, head of U.S. Northern Command and North American Aerospace Defence Command. “They’ve been very aggressive — under my NORAD hat — for us in the Arctic.”

Concerns about heightened activity by Russian submarines, naval forces and aircraft in this region are echoed among the five Nordic states, with suggestions emerging from the Nordic Defense Cooperation for a battle group that could be deployed in the Arctic.